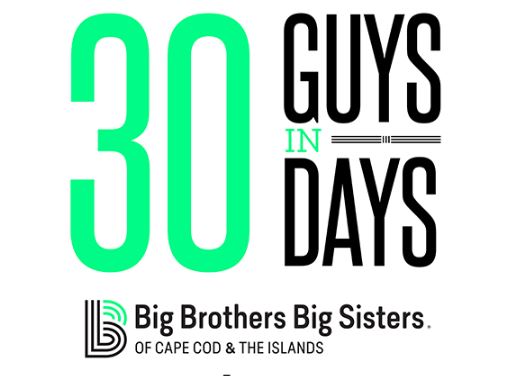 After a successful start last year, Big Brothers Big Sisters of Cape Cod & the Islands is relaunching its “30 Guys in 30 Days” campaign. The agency is seeking to recruit more men on Cape Cod and Martha’s Vineyard to support the high demand for mentors.

JR Mell, the organization’s regional director, said “It is a misconception that being a mentor is a huge commitment. We ask for volunteers to commit to a minimum of a year with a child in the community, meeting them two to three times each month for a few hours each time doing activities that you’d probably already be doing and enjoying. All of the bigs that I have talked to who have come forward and joined find that it’s very, very manageable. They feel like they almost get more out of it than the kids do, but it is a very rewarding volunteer opportunity on both sides.” Even though the minimum commitment for volunteering is one year, Mell says that most matches will continue as a lifetime friendship when the child outgrows the program. Mell volunteered as a big brother for close to ten years and feels that it’s the most rewarding thing that he has ever done.

A need for male ‘bigs’

Finding male mentors continues to be the biggest need for the organization. For every one girl who is referred or signed up for the program there are four boys. On the volunteer side, for every male volunteer who signs up there are four women who become mentors. “We are left with this large imbalance that we are trying to address with this campaign,” Mell said.

Big Brothers Big Sisters currently has 80 youth on a wait list for mentors with 63 percent of them being boys.  The “30 Guys in 30 Days” campaign was started last year as the wait list for boys had really grown. “We found it to be really successful in the community.” The campaign will be promoted across the region through digital videos and in-person events to show men what it means to be a mentor with the organization. The enrollment team, which matches bigs with littles, get to know volunteers as a person and match them with children who have similar interests.

Many other community organizations already come forward to help with the campaign. Barnstable Police Officer and Big Brother Corey Frederickson, Cape Cloth’s Founder Sean Fitzpatrick, and Peter Rice with the Cooperative Bank of Cape Cod and a Big Brother will all be featured in video clips highlighting the need for male volunteers. You can watch Peter’s video below.

Cape Cod Young Professionals and The Entrepreneurial Networking Group of Cape Cod will partner with the agency at their March events to help raise awareness and recruitment opportunities for potential volunteers.

Interested volunteers can learn more at www.bbbsmb.org/cape-cod/.
Groups or organizations who may want to help the agency with the campaign should contact Mell at jrmell@bbbscci.org or by calling 508-771-5150 extension 101.