Our West Barnstable and Sandwich branches will be drive-up service only on Saturday, October 23.

Our Sandwich branch will continue drive-up service only on Monday, October 25.
For alternate branch lobby location hours, please visit our locations page. We apologize for any inconvenience. 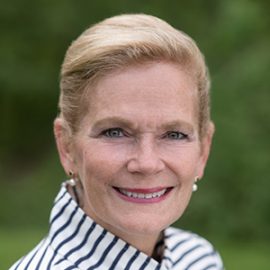 For three decades, Lisa J. Oliver has been a distinguished leader in the banking industry across New England and the Midwest. In 2017, Lisa joined The Cooperative Bank of Cape Cod (The Coop), as President and CEO, becoming the first female CEO in its 100-year history. In 2020, Lisa was named the Bank’s first Chair of the Board of Directors.

At The Coop, Lisa’s notable accomplishments include driving profitable growth during her tenure with a 44-percent increase in assets to $1.3 billion in 2021, 29-percent growth in capital to $107 million and advancing more than $120 million in PPP loans to 1,500 businesses. Lisa achieved 50-percent gender diversity on the Board of Directors and across the Bank’s senior leadership team, earning recognition from BankDirector Magazine as a top bank nationally for Board diversity.

To expand The Coop’s mission as a mutual bank, Lisa established The Cooperative Bank of Cape Cod Charitable Foundation Trust in 2018, which has distributed nearly $500,000 since inception to meet the fundamental needs and challenges of people across Cape Cod. In 2021, she oversaw the completion of a $13 million renovation of the Bank’s headquarters, creating a modern workspace to support a culture of employee collaboration, communication and engagement.

Throughout her career, Lisa’s philanthropic focus has been purposeful and enduring. She is a board member of The Cape Cod Foundation and Cape Cod Chamber of Commerce, where she serves as treasurer. In 2019, Lisa was appointed to the Board of Directors of the Massachusetts Bankers Association and received the Distinguished Citizens Award from The Cape Cod and Island Council Boy Scouts of America. She frequently speaks to business and civic organizations and was a panelist for Bank on Women’s 2021 discussion on gender diversity in the workplace.  Lisa previously held volunteer leadership positions with the Rock & Roll Hall of Fame and American Heart Association, where she led the Go Red for Women campaign for 3 years.

Before joining The Coop, her career included 25 years of increasing leadership roles at KeyCorp, a $181 billion financial services institution where she led progressively larger teams and geographies across commercial, retail, and private banking disciplines. In her last role, she served as the Executive Vice President and National Executive for KeyCorp’s Business Banking Segment, driving client relationship strategies, efficiency, and innovation from Maine to Alaska.

Lisa is a graduate of Colgate University, where she studied International Relations and French. She also completed the Executive Leadership Program at Case Western Reserve University. Lisa, who is an avid gardener, lives on Cape Cod with her husband, Richard, and two black labs. They have two grown sons.