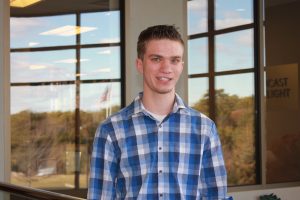 Brian Hegg has loved computers since he was a kid.

At 14, he took apart his first computer and learned to put it back together again.

The Upper Cape Tech grad went on to his first job and started college, but something didn’t quite feel right. He returned to the Cape and got on track at Southern New Hampshire University.

Then, by what he calls “a stroke of luck” he landed a job at The Coop in 2016. “It felt surreal to be 21 and working in the IT department at the bank.”

However, Brian wasn’t sure he could financially juggle his full-time job with school.

“I was going to drop out at first,” he said, until he discovered The Coop’s tuition reimbursement program for employees. “Thankfully the bank had the tuition help. … The amount of financial stress The Coop took off me was invaluable.”

Brian kept working full time and switched to part-time at school. That worked for him because he could immediately apply what he was learning to his job. Plus, he received extra schooling and mentorship from Matt Teehan and Mark Braman, who both took an active interest in his studies and supported him throughout his journey.

“I’m really appreciative that Matt, Mark and I are a good team,” he said. “They gave me lots of opportunity to take on new challenges.”

Brian also achieved a 4.0 GPA. And now, he’s a college graduate with a Bachelor’s of Science in Information Technology.

And we’re proud to have Brian on our team!