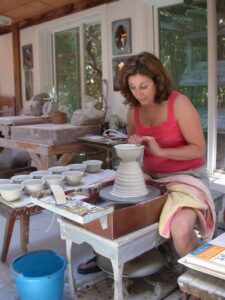 Kim Holl throwing bowls in the studio in 2011. 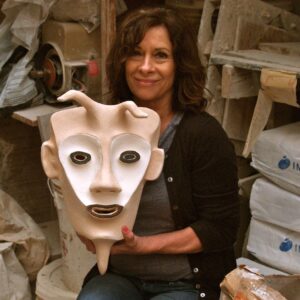 Tina Holl displays her latest piece in this 2016 photo at the studio.

Scargo Pottery was started in 1952 by Kim and Tina’s late father, Harry Holl, who was best known for his pottery but also was a sculptor and painter. He studied art at the Beaux-Arts Institute of Design before serving in World War II. After the war, he studied at the Arts Students League in New York and later Black Mountain College in North Carolina. It’s there that he met his wife, Mirande Geissbuhler. His new father-in-law was a sculptor and had property in Dennis, bringing the couple to Cape Cod.

Today, Scargo Pottery is a functioning pottery studio that’s loving located in the wooded area near Scargo Lake in Dennis. It’s modeled after a Japanese pottery village, where visitors can see artists at work. The open studio space features the distinctive high-fire ceramics of resident artists: wheel-thrown and slab-built pieces, sculpture, tiles, lamps, and garden pieces, as well as exhibitions of paintings, jewelry and other media.

Kim and Tina, along with their sisters Sarah and Mary, were trained by their father at the studio. In a 2009 Cape Cod Times’ article, their father said, “Tina’s work is bold and big and very contemporary, while Kim is a very functional, practical person. Everything she makes has a reason and purpose. … Sarah is interested in the social side of art. … I’d marvel at (Mary’s) skill, watching her work in order to emulate her technique. She has a delicate touch, creating depths, details and patterns that are very whimsical.”

Want to learn more about Scargo Pottery? Follow them at these links: