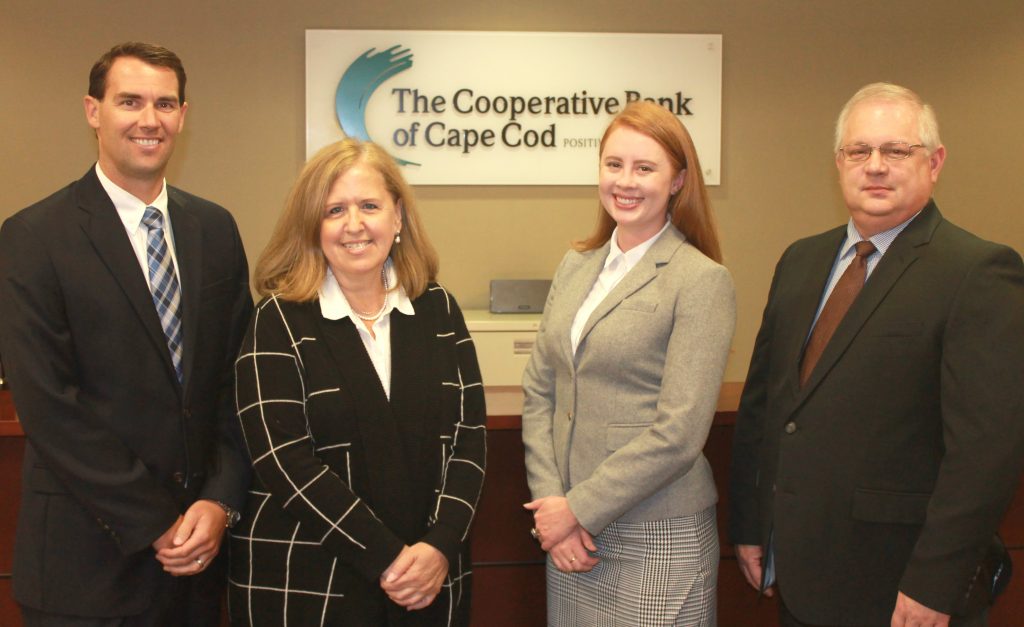 The Cooperative Bank of Cape Cod is pleased to announce the recent promotion of four remarkable employees.

Patricia Coffey was promoted from Assistant Vice President to Vice President. As a Senior Commercial Credit Underwriter with the bank, she has been an instrumental part of the Commercial Banking and Commercial Credit teams for the past two years.  She has more than three decades of banking experience at Cape Cod institutions. Coffey received her BSBA from The University of Massachusetts Boston and resides in South Yarmouth.

Paul Forni was promoted from Assistant Vice President to Vice President. Forni joined The Coop in 2012 and has served as the bank’s Information Security Officer since 2014. He has more than twenty years of banking experience at Cape Cod financial institutions. He received degrees in Computer Systems Management from Johnson & Wales University, and is also a graduate of the New England School for Financial Studies. He currently lives in Yarmouth.

Charlotte Green was promoted to Residential Mortgage Sales Manager, Officer. After nine years in the mortgage industry, Green joined The Coop in 2018 and has quickly made a positive impact in her department.  She graduated from The University of Massachusetts Amherst and currently resides in Bourne.

Rob Carey has been promoted from Assistant Vice President to Vice President and Relationship Manager. He joined The Coop in 2013 as a Business Development Officer in Commercial Lending, after nearly a decade of financial experience in Boston and California. Carey earned his Bachelors of Science and M.B.A. from Bryant University.  He is a resident of Sandwich.

“Pat, Paul, Charlotte and Rob have all demonstrated exceptional leadership, work ethic and successes in their respective roles with the bank,” said Lisa Oliver, President and CEO of The Cooperative Bank of Cape Cod. “I’m proud of their accomplishments, and I’m proud they have been able to grow and develop their careers here at The Coop.”

If you’re looking for a positive work environment, generous benefits, and competitive pay, The Coop is for you!
Please join us for our Fall Hiring Open House from 4:30 to 6:30 p.m. Wednesday, Oct. 2, at our Hyannis Branch, 695 Attucks Lane.
Come see why we love working at The Coop!