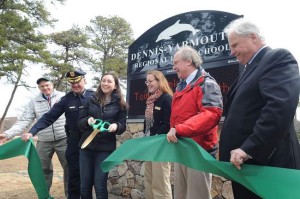 Shortly after noon on Friday, March 28, the Daktronics Galaxy electronic message board in front of Dennis-Yarmouth Regional High School lit up for the first time with a series of messages thanking the donors that made the $50,000 project possible.

“This was a team effort,” said DY Principal Ken Jenks, referring to The Cooperative Bank of Cape Cod, the Yarmouth Community and Economic Development Committee, the Yarmouth Police Department and gifts of the DY classes of 2009 and 2013. “As people drive down Station Avenue, I hope they will see the sign and attend the events that it heralds, uniting the generations.”

“In 2009, I met with a group of concerned retirees [now widely known as D-Y Support Our Schools], and one of their concerns was making the public aware of all D-Y has to offer,” Woodbury told the dignitaries gathered to celebrate the project’s completion. “They noted D-Y’s dedication to the visual and performing arts and asked why we had no message board to inform the public of our great events.”

Phil Wick of D-Y Support Our Schools served as the primary impetus to make the message board, kicked off by a $1,000 donation from the Class of 2009 dedicated to the purpose, a reality. In 2012, Woodbury met with the officers of The Cooperative Bank of Cape Cod and later with President Joel Crowell, who committed a sizable donation to the project. Bob DuBois, former Yarmouth Chamber of Commerce executive director, exacted a similar commitment from Yarmouth’s CEDC and police department.

Woodbury noted that making the dream a reality took patience. “Rivers know this. There is no hurry. We shall get there some day,” she said, quoting from A.A. Milne’s “Winnie the Pooh.”

Crowell, a 1968 D-Y graduate, said the sign is in the very spot where he once planted bulbs. “Phil started the conversation and just wouldn’t let it stop,” he said. “It’s a great idea and proof of what happens when we all focus in the same direction. This is about community, about sharing what’s going on.”

CEDC Chairman and Vice President and Commercial Loan Officer for TCBCC Peter Smith looks forward to seeing the sign promote special events and celebrations in town. Yarmouth Police Chief Frank Fredrickson contributed a portion of his emergency management funds to the effort, noting that the high school serves as an emergency shelter.

DuBois, now living in Indiana, called Wick as he was heading to the high school for the event. “He was wearing his DY sweatshirt to celebrate,” Wick said. “The high school is the hub of our community, and now we will alert the community to what’s happening here.”